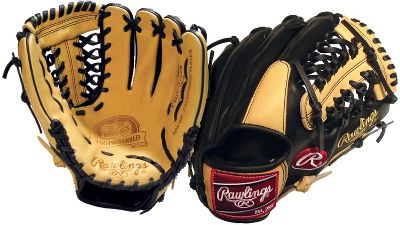 Rawlings Baseball Gloves and Bats: One of the most common baseball glove brands you will see on the benches of high school and slow pitch softball dugouts comes from Rawlings. The company was founded in 1887 and is headquartered in St. Louis, Missouri. The company is one of the largest in the market and is a licensed manufacturer of gloves for Major League Baseball and the NCAA. The company is also a licensed producer of products for the National Football League.

Rawlings was the producer of the first major glove innovation in 1912. This innovation was the “sure catch” glove which was a one-piece unit with sewn-in finger positions. As years went one, more changes were made to the glove, including one at the suggestion of Bill Doak. Doak’s idea was to turn the fielding glove into something that wasn’t just for protection, rather make it something that could be used as an asset for fielding batted balls.

Rawlings is also known for is the Rawlings Gold Glove Awards. As an officially licensed produce of gloves for MLB, this award is meant to award those players that have shown the best ability to use their gloves in the field. The award has been awarded annually since 1958 to the best defensive players at each position from the American and National Leagues.

See all our great Rawlings baseball gloves and bats at Cheapbat.com